Today Kuura turned 1 year old. She is a charming little cat and I love having her around. She loves a good snuggle, sometimes settling on a lap, but she also likes to curl up in the crook of my arm when I'm watching telly. She only settles down after she's paraded back and forth across you a few times, climbed up your chest and pushed her face into yours.

She's a determined soul; she goes where she wants with little regard for where others are going. Kuura and Tycho were both running down the stairs the other day, Tycho happily minding his own business. Kuura caught up with Tycho and switched from the right to the left, to take a more direct route across the turn. She dashed across suddenly, right across Tycho's path and so close she almost touched his nose, and hurtled down the last few steps. Tycho came to a sudden halt as she flashed past right in front, and was left standing still on the step, wondering what had just happened.
She doesn't pay much attention to where I'm going either, and hasn't figured out that humans can suddenly reverse from standing still. I don't think I've ever collided with a cat as much as with her. I don't even have to be moving. The other day I was sitting in my armchair, with my legs crossed. Iella ran towards me, with Kuura play-chasing. Iella swerved and went to one side of my chair. Kuura ran face-first into the sole of my foot.

She won't grow as big as the others, but it's not for lack of trying. To say she's enthusiastic about her food is an understatement. I think she may have a black hole for a stomach. She always gets fed first. It doesn't matter which bowl I put down first; her head will be the first one in it. Once she's cleared her bowl, she'll be seeing what's in the others. I don't think I've offered her anything she won't eat yet - stuff you'd expect a cat to eat, anyway. Tycho, for example, doesn't like prawns but Kuura does. I have to watch out if I have a cup of tea on the table by my chair, because she will poke her face into it. I'm pretty certain she hasn't managed to sample it yet, but she's interested in it. Life is never dull with her around. 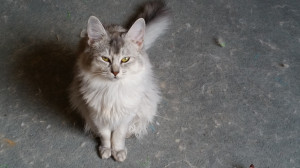 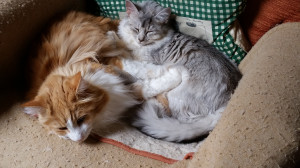